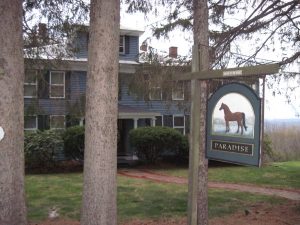 Glenn owns a big old house—a really large house of sixteen rooms with five bedrooms, built in 1804, about fifteen minutes from a small city in New England. He loves it. He bought it with his wife, and when they divorced, he kept it.

Realizing that the big old house needed a housekeeper and that he could help someone out, he put an ad on craigslist offering free housing in exchange for fifteen hours of cleaning a week. That was nine years ago. He’s had a series of housekeepers ever since.

Once that started, he opened up the other bedrooms to additional housemates. In addition to a fully furnished room with its own flat screen TV and a small fridge, all Glenn’s housemates have DirectTV, internet, a tennis court, a fitness room, and a spa. With a four-car garage there’s even storage in the garage!

He insists that his housemates use the furniture that is in their rooms. If they need to store their stuff, there is space on the property. “I want them to be using my stuff.”

There is a huge kitchen that everyone uses as needed. Most people keep their food in their rooms. They don’t eat together.

Says Suzanne* a resident in the big old house, “Everyone cooks for themselves and we all share the kitchen.” As an example she says, “This weekend when I went to start cooking, Glenn was already in the middle of making something too, only he was using some countertop appliance thing for meat and he had corn going on the stove. I was making rice noodles and tofu-veggie stir fry. We worked around each other just fine. His meat was cooking and didn’t need him to stand by it. I was watching my noodles and stir fry at the same time. It was no problem and it was kinda nice too because we were chatting about food and he told me some stories about the history of the house. It’s this sorta thing that I appreciate because the social part is really nice, but not so often or too much that I don’t feel I have alone time or space.”

“Each of us has a mini-fridge and a sink in our rooms (apparently it is somewhat common in big old houses built for the well-off so ladies and gentlemen didn’t have to leave their rooms unwashed) and I keep an electric tea kettle and toaster oven in my room as well so for quick and simple foods I don’t have to go to the kitchen.”

Everyone comes to him through craigslist. Glenn says, “I’ve been in the insurance business for years, used to own three insurance companies, I think I’m a pretty good judge of people.” Over the course of the years Glenn thinks he’s had between twenty and twenty-five people live with him.

He says, “Most of the people who live here are in transition of some sort. They’re leaving a relationship, they sold a house, they’re moving to the area.”

When he interviews, he makes it clear that his “must-have” is a neat and clean house. He sets parameters about what the housemate can expect and what is expected of the housemate. He expects folks to be respectful of each other, for instance not being noisy when others need to sleep. A current housemate routinely starts her day at four in the morning.

Glenn talks to people on the phone before he has them come and see the house. He gets a feeling for the person by the way they talk and what they say. He also asks for references in the telephone call and calls references before the potential housemate comes to the house. One reference is a boss, another a person who knows the person. Occasionally, references won’t check out and he’ll tell the person not to bother coming to the house.

He says, “Most of the housemates are ones that I really love. I’ve had so many good ones.” He talks about a guy who stayed with him for a while, who had moved in after selling his house and not yet sure what his next step was. That housemate is currently on a motorcycle trip to South America but has an open invitation to come back to the house.”

Glenn admits that he’s also made mistakes. He says, “It’s always my fault. I’ll feel sorry for somebody and want to help them.” In those cases, he ignores his own judgment that it won’t work out. But he also doesn’t let the situation get worse. “I give them thirty days’ warning that they have to move out.” For instance, he had one housemate who couldn’t keep his room clean. Glenn told him he had to move. One time he rented a room to a woman who didn’t have a car, and although she claimed it would be fine, the lack of public transportation and her dependence on others for rides made it too difficult for her to live there.

Mostly Glenn is thrilled. He likes the people he lives with and has company. Many of them turn into trusted friends.

One of his housekeepers got engaged while living in the house. Glenn says, “She asked me to officiate as Justice of the Peace and asked if the wedding could be in the house. I was delighted.”

Many of the people who share housing do it primarily for the cost savings. Not so here. Glenn has people living in his big old house because very simply he realized that his was lonely. Kudos to him for taking action.

This is an unusual set up in that he insists that his own furniture be used—I think this requirement guarantees that people won’t stay forever. Having our own stuff in the place we live seems to be a fairly basic need. (Unless you are purposely divesting yourself of that sort of attachment like John did as described in this article.) If you want a more permanent arrangement, making space for your home-mates belongings in necessary.

The process Glenn has developed for screening candidates is pretty close to the one I recommend in Sharing Housing, A Guidebook for Finding and Keeping Good Housemates. The one difference is that he calls references before meeting people whereas I have it at the end after deciding if there is a fit. In Glenn’s situation where he is pretty certain the other person will like the setup (big old house with lots of amenities and cheap rent), it makes sense to do this screening prior to meeting in person. As he points out, it has saved him some time in the whole search process.

And he gets to enjoy having people around. Do you know anyone living alone in a big old house—or even a new one with extra bedrooms? Share this article with that person. Help that friend or family member start to think about opening up their house. There are benefits beyond the income.

*Suzanne is a convert to shared housing. Here is her interview of four years ago.