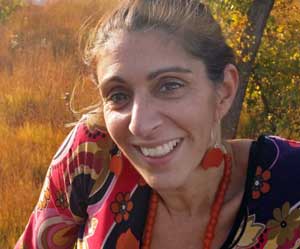 “I wouldn’t live any other way!” says Kara. She’s had different housemates over the last ten years.

“I always want to have a housemate. I enjoy it and it’s such an easy way to supplement my income. I always make sure I have enough space for another person.”

She likes the companionship — being able to have a chat with someone, make a meal, and share the chores. She also likes how meeting her housemate’s friends extends her social circle. She says, “Last week I went to the movies with friends I made through my former housemate. I never would have gotten to know them.”

Renting a room covers her part of the mortgage and some of the utilities. This income made it possible in the start-up of her new business – designing handbags and other women’s accessories.

Kara attributes her preference towards living with others to the eleven years she lived overseas in Southeast Asia and Africa working for nonprofit organizations. She always had English-speaking housemates. It “was a nice way to feel a link to home.” After spending the day struggling with communicating in a foreign tongue, it was “good to connect to one’s own culture and have some familiarity. I got very close to my housemates from overseas.”

Kara lives in Burlington, Vermont in a large house that she owns with her brother. Built in 1848, it was falling down from years of neglect when they took ownership ten years ago. It took them a year to renovate it. For some reason there were already kitchens on each of the two floors, so it was easy for them to divide the house into upstairs and downstairs. Kara has the second floor. Her brother the first floor. They are equal owners of the house.

On Kara’s floor she has two bedrooms, each with a bathroom, a living room and a kitchen.

Kara states, “Burlington is a renter’s market. Whenever I advertise I always have a really good response.” “I’ve developed my own system for finding housemates. I have friends at the University. When I’m looking for a housemate, I’ll send them my advertisement and they post it on the listservs in their departments. I figure masters and doctoral candidates have their shit together so it’s a way of pre-qualifying the responses.” Almost all her housemates have come to her that way.

“If after a few weeks I don’t get a good response I’ll post on craigslist and send my advertisement around to a larger network of friends.”

The ad describes the place, what Kara is looking for, who is a good fit, a bit about Kara, a note about the resident dog being an “only child” (i.e. no other pets welcome) and the statement that cleanliness is really important to her and she likes a clutter-free house.

Generally people respond for whom the cleanliness and neatness are also important to them. No one has ever lied to her about this.

Also people move in who are energy-conscious like she is. That means they’ll keep the heat down, putting on a sweater if they are cold, having the heat down at night.

“I always write, if interested, please write back with a little bit about yourself. It’s telling if they don’t take the effort to respond but send one line. I tend not to respond to those inquiries. When they write, I read the response. If one is interesting, I find a time to show the house and meet each other. We’ll have a cup of tea. I try to get a sense of whether the person would be good to have in my home. Sometimes I know right away that there’s a good fit. It’s a gut feeling. But I never, ever say so. I always go through my routine, I ask them for three references. These references can’t be friends or family. They should be supervisors, professors, colleague, a former landlord.”

“I call the references and talk to them. I always ask how long they’ve known the person. That’s very telling. I’ve never been wrong about a good fit. Sometimes I talk to two references and decide I don’t need to talk to the third one.”

“I always ask for a deposit to hold the place. I learned to do that when I’ve offered the space and expected someone to move in and then three days before they are supposed to move in they call and say they’ve found something else.”

Food is always independent. She has the left side of the fridge, her housemate has the right side.

Kara likes sharing meals when it works out. She’s had housemates where they plan to eat together one night a week. Another housemate would cook up a “massive meal” which she would be invited to share. Kara says, “I don’t cook much, but I do make breakfast. I would try to balance out his offerings with breakfast meals.”

“I always learn something new” says Kara of her housemates.

For instance, she’s learned to make some great dishes using seitan and tofu, which she had never experimented with before living with her first vegetarian housemate. And her last housemate was a big fan of ”juicing,” which Kara also starting getting into.

That same housemate was also into crystals. “He put the right ones in each room generate positive energy in our home.” She was introduced to using a stick method to dry plastic bags so that they could be reused.

Kara’s Advice On How to Start

Asked what she would say to someone considering sharing housing she advises, “It’s not hard to find the right person, if you do the steps. You need to do it carefully. I’m not a risk taker. I only want solid people who have a source of income and a clear purpose with what they are doing. If you are nervous about this [living with someone], try it out for a short-term. Live with someone for a summer or a semester, someone who will be leaving. Then if you discover that you like it, you can do it for longer.”

Kara’s “system” is very similar to the process described Sharing Housing, A Guidebook for Finding and Keeping Good Housemates. She writes a descriptive ad, stating her “must-haves” and “can’t-live withs”.  Then she filters the responses. Reading the responses she decides whom she is interested in interviewing. The candidate has a house tour and she interviews them. She waits until she checks references before inviting someone to move it. All good and careful.

She also uses her extended network by asking friends to post the ad in their communities, in her case graduate departments of a university. Other types of extended networks could be church groups, employee listservs, alumna newsletters, clubs of people with a common interest, and veterans groups. Really anywhere that people are in communication with one another.

What extended networks do you have through your friends? How could you use them to help you find a suitable housemate or two?