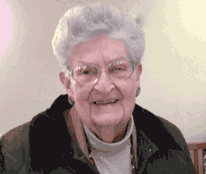 Pat came to a talk on sharing housing that I did at her church. I had noticed an elderly woman sitting in the front row, listening intently. Afterwards, she came up to me and said, “Well that’s what I was doing for 30 years, I didn’t even think of it.”

Back in 1973, Pat was going through a messy divorce. Her work colleague, Libby, said, “It’s expensive to live on your own. Come live with me.” Now, Pat and Libby weren’t really friends, although they talked at work (they were both deans at a university) and had roomed together when traveling for conferences and meetings. Libby said, “I know you are neat” and made one condition — that Pat stay out of her kitchen. Well that was fine with Pat; she didn’t really care much about cooking, so she moved in.

They lived together for thirty years. They were home-mates.

Pat says, “We liked the same things. We liked to travel. It was very companionable. It grew into more than a place to live, she was like my big sister.” Libby was 10 years older. “It was a real home for me.”

Libby inherited the house from her family, who had bought it in the 1870s. She had no children. The house was large, with two bedrooms and a bathroom upstairs, and downstairs a living room, kitchen, dining room, bathroom and screened-in porch.

Pat goes on, “When I moved in I never thought about how long it would be. I brought a few pieces of furniture. We both liked Early American so my stuff just fit in. We never had any arguments! Ever. I suspect that’s an unusual thing. There’s always a little giving on every side.”

Libby was an avid gardener and didn’t want Pat in the gardens. So Pat happily mowed the grass.

Pat paid a “ridiculously low” rent. Every year they would have a conversation about it being time to raise the rent. And it would be raised. Libby paid the bills and never shared the financial information with Pat.

How They Lived Together

They ate dinner together most evenings. Libby planned the menus and did the grocery shopping. “She would always ask me what I’d like,” Pat says, “and we go and shop together. I don’t really have an interest in food. She was a very good cook, and seemed to like cooking for us.” Breakfasts and lunches were more casual, as they had different schedules and usually drove to work independently.

They divided the cleaning up. One week one would do the upstairs and the other would do the downstairs. They switched the following week. Every Thanksgiving they would do the annual cleaning. It worked out very well.

After a year or so of Pat living in the house, Libby announced that they needed more space. So she extended the house by converting a screened porch into a room. This became Pat’s room, where she had her papers and TV.

“We never talked about living together,” Pat says. “We just did it. Libby was a very private person, noncommittal and even-tempered. I’m different, my emotions are right out in the open.” When Pat moved in, her three children were teenagers, ages 19, 17 and 14. While they continued to live with their father, they would often visit their mother. Pat says, “Libby was very welcoming of the children, She enjoyed having them around.”

Pat volunteers, “I know some people think we were a couple, but it wasn’t that way. We were just well suited for living together. We always took vacations together and went on some wonderful trips.” On those trips they would split costs evenly.

Libby became part of Pat’s family and was always included in family holiday gatherings. On Christmas Eve, Pat and Libby would have Pat’s children. As those children became adults and had their own households Pat and Libby were invited for Christmas and Easter. Thanksgiving they did the housecleaning.

Libby retired 10 years before Pat. When Libby stopped driving, Pat would take her to the store to do the shopping. They ate out more often so that Libby didn’t have to cook. They hired a cleaning person and a gardener.

Libby developed dementia but Pat didn’t recognize it at first. She noticed that the newspapers were piling up; Libby was planning on reading them but didn’t get around to it. And Libby was less happy in the kitchen. Just as Pat arranged for Libby to be evaluated for dementia, Libby had a stroke that took her speech away. At that point, Pat found her a nursing home close to the house. Libby lived there for 19 months before she passed away at the age of 86.

Libby’s will allowed Pat to stay in the house for as long as she wanted provided she pay the maintenance and property taxes on the house. Pat continued to live there for eight years until she decided it was time for her to move to assisted living.

For thirty years, Pat and Libby benefited financially by sharing, had company, help with tasks (imagine never having to cook!), and someone who cared what happened to them.

Pat says, “I never thought of it. It just what we did.”

I’m convinced that there are more of these relationships out there and more stories of people who by some series of events made a home with a person (or people) who isn’t related by blood, or a sexual partner. Let’s call it having a home-mate. If you know someone who has a home-mate, tell us the story in the comments below, please.