You are here: Home / Commentary / The New “Golden Girls” On NBC News 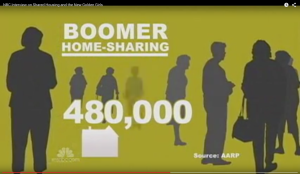 NBC interviewed four women and one man living together in a four-bedroom house in Asheville, NC. The interviews and footage show the housemates living the four advantages of sharing: money, company, task-sharing and help in emergencies. Watch it.

One member of the house is Marianne Kilkenny, founder of Women For Living in Community. There’s lots more information on her website about the whole notion of consciously choosing to live with others as a retirement strategy.